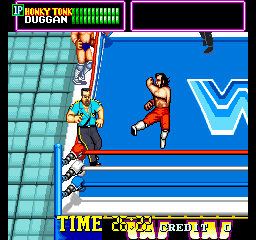 WWF Superstars is an arcade game manufactured by Technōs Japan and released in 1989. It is the first WWF arcade game to be released. A series of unrelated games with the same title were released by LJN for the original Game Boy. Technōs followed the game with the release of WWF WrestleFest in 1991. Features The game features some of the signature moves and trademark mannerisms of the wrestlers in the game. There are also cut scenes featuring Ted DiBiase, André the Giant and Virgil. Mean Gene Okerlund and Miss Elizabeth make appearances as well. Before the first match, the player's chosen team enters the arena via the "ring cart" seen in WrestleMania III and WrestleMania VI. Gameplay Hulk Hogan and the Honky Tonk Man team up in a tag team match Players select two wrestlers to form a tag team. The playable wrestlers are Hulk Hogan, "Macho Man" Randy Savage, The Ultimate Warrior, Big Boss Man, "Hacksaw" Jim Duggan, and The Honky Tonk Man. Up to two players can play at once. The players take their team through a series of matches with other tag teams in New York City and then Tokyo. The game features a basic grappling and attack system. From a grapple, a player can either toss the opponent, throw them into the ropes, or go into a headlock from which two character-specific grapple moves can be performed. Each wrestler also possesses standing strikes, running attacks, running counterattacks, ground attacks, and moves from the top turnbuckle. A referee is present in the ring, but cannot be attacked or otherwise affected by the wrestlers. It is also possible to brawl outside of the ring, provided the player reenters before a count of 20. There, a table can be picked up and swung at opponents. If both wrestlers go outside the ring at once, their tag team partners automatically jump out to join the fight. Occasionally one of these partners will wander off screen and return wielding a folding chair. Neither the chair nor table can be taken inside the ring. After three matches are won, players get to challenge the Mega Bucks ("The Million Dollar Man" Ted DiBiase and André the Giant) for the final round. Most grapple moves do not work against André because of his immense size. The Mega Bucks are not selectable characters. However, there are cheats for MAME that allow them to be used (together or separately), the drawback being that if DiBiase or André get a submission victory, the game will think that the player lost. Also, there can sometimes be graphical errors which will make the in-ring opponent disappear. If the player wins the title match, a newspaper headline heralding the players' tag team as champions is shown. The player is then taken through another series of three matches (one of which will feature DiBiase) in the other city and a final match against DiBiase and André before the game ends. Description from Wikipedia.

WWF SuperStars is an arcade game based on the world of the World Wrestling Federation (WWF) from the 80s. The game solely plays the Tag-Team element of WWF and allows you to choose from the biggest stars of the time, Hulk Hogan, Ultimate Warrior, Big Boss Man, Macho Man Randy Savage, Honky Tonk Man and Hacksaw Jim Duggan. The aim of the game is that you and your partner win three matches before facing Ted DiBiase and André the Giant to become Tag-Team Champions.

The characters signature moves are included and as well as punching and kicking you can grapple, throw and bounce your opponent of the ropes before knocking them down. If your wrestler in the ring is getting beat or weakening you can go to the side of the ring where your team mate is standing and 'Tag' him and allow him to fight. To win the fight you can either throw your opponent out of the ring and if he fails to get back in the ring after 10 seconds then it's fight over, or pin your opponent down on his back for the count of three by the referee. As you are pinning though, your opponents partner will enter the ring to stop this as well as your partner trying to stop him.

The game is a top-down side view where a part of the ring is shown. Using the joystick and buttons you can pull of the various moves. On the top of the screen is an energy bar. The lower it is the less chance you have to escape a pin-down.

This is just what I've figured out. I haven't managed to figure out what button 3 is on the PC.
Reviewer: DNL2015 - favorite - July 6, 2015
Subject: Unable to play game
I was unable to play this game because the box with Insert Coins and Player 1 and 2 did not appear on screen.

Without that box you cannot play this game.